Joonbug.com premiered the new video for ‘We Ride,’ the lead single which Missy wrote for the Spark: A Burning Man Story movie & soundtrack.

Missy will guest present a show on Dig Music this Fri Nov 1 from 2pm east coast time. From lush instrumental soundscapes to the female artists she looks up to, Missy will share a playlist of her favourite new music and some classic tracks too.

Tune in via the Dig Music radio app, your dig radio or online right here.

A new documentary ‘Spark: A Burning Man Story’ opened in select theatres across the U.S. and was released in North American iTunes stores in mid August this year. The film is shot at the ‘Burning Man Festival,’ which is held each year in Nevada’s Black Rock Desert, dedicated to community, art, self-expression, and self-reliance.

Accompanying the doco is a beatuifully crafted soundtrack which includes a new original theme song written by Missy for the film ‘We Ride,’ as well as a stack of other talented artists from around the globe.

The soundtrack and Missy’s new single ‘We Ride’ is available digitally in Australia and around the world now.

A release date for the documentary around the rest of the globe is still being confirmed.

Missy will return to her high school town of Geelong on Sun Sept 29 to perform in a very special show, alongside a huge list of talented Australian artists.

The show, to be held at Simonds Stadium the day after the Grand Final, is a fundraiser for local lad Casey Tutungi, who suffered a horrific spinal injury several months ago while playing football for South Barwon in Geelong.

A Show For Casey boasts a truly stellar line up with You Am I Allstars, Something For Kate’s Paul Dempsey, Regurgitator, Lisa Mitchell, Magic Dirt’s Adalita, The Bamboos, Dan Sultan Yacht Club DJs and now the addition Missy Higgins. An all ages show (children 12 and under admitted for free. Over 18’s bring I.D – this is a licensed concert), with a low ticket price of $50 (+ bf).

Casey and his family have received an outpouring of support from the local community as well as from the national football and now music communities with A Show For Casey bringing people together for a great day and a great cause. All profits from A Show For Casey will go directly to The Casey Tutungi Appeal

Tickets available from Oztix or at your nearest Ghanda store.

Missy has just announced she’ll be heading to Townsville for a very special show this October.

Performing an intimate acoustic set, Missy will play at Jupiters Ballroom in Townsville on Thursday October 10.

Pre-sale tickets will be available to members of Missy’s facebook page at 9am on Tuesday August 6. Stay tuned for the pre-sale password, which will be posted Monday August 5. Tickets then go on sale to the general public at 9am on Thursday August 8.

Special guests on the night will be acoustic folk duo The McMenamins. Originally hailing from far north Queensland, the siblings have released four independent albums, received two Queensland Music Awards and toured extensively both locally and internationally for the past decade.

Missy last played in Townsville in 2007 and while it’s been a while between shows and she’s excited to return to the warmth of far north Queensland to perform for fans.

Music Botanica is back, but this time under the stars in the Cairns Botanic Gardens! The event held on Friday October 11 has announced today it will feature a special performance from Missy, as well as local favourites The McMenamins.

On sale at 9am on Friday 28 June,  fans are being urged to secure tickets early as the show is expected to sell-out quickly. Tickets will be available from www.ticketlink.com.au or phone 1300 855 835.

Music Botanica Under The Stars is an outdoor musical celebration proudly presented by Tanks Arts Centre in the Cairns Botanic Gardens.

A few days ago I blacked out, had a dream about all young people being properly enrolled to vote, and this happened.

Share it with your friends if you believe we should all have a say in the future of our country, or just to have a giggle at my expense. I would. I do! Then, go to: www.aec.gov.au/enrol.

Even if you think it won’t make a difference, or you’ve lost hope in our leaders (like a lot of us have)… let me tell you that every vote you make puts a little bit more power in the hands of the good people in the Senate. In other words, it’s not just about who becomes Prime Minister, there are plenty of other people in parliament who are doing great things, they just need your vote to give them a louder voice. And if anything, it will stop just one party from having COMPLETE CONTROL over everything. That’s a scary idea.

Tickets for Missy’s first ever live show in Broome were eagerly snapped up by fans this week, with the show at the iconic Sun Pictures on Friday June 14 selling out within 24 hours.

A second and final show in Broome has now been announced at Sun Pictures on Thursday June 13. Tickets are on sale now with net proceeds from both shows being donated to the Leukaemia Foundation, Kyle Andrews Foundation and the Royal Flying Doctors Service.

Local favourite Naomi Pigram will also perform at the additional show. Naomi is one of the most exciting new Indigenous female artists to spring from the dynamic musical culture of Broome and has also fronted notable Indigenous bands such as One Strum and St Agne.

With tickets for the second show expected to sell quickly, fans are being urged to secure tickets early to avoid being disappointed.

Missy announced today that she is returning to her much loved city of Broome in Western Australia for a very special performance next week.

Performing an intimate acoustic set, Missy will play her first ever live show in Broome at the iconic Sun Pictures on Friday June 14. Tickets go on sale tomorrow, Wednesday June 5, at 9am with net proceeds from the show being donated to the Leukaemia Foundation, Kyle Andrews Foundation and the Royal Flying Doctors Service.

Earlier this month, Missy was forced to cancel her performance at the Mothers Day Festival in Broome and she is now looking forward to making it up to local fans who missed out whilst also providing much needed support to several worthy organisations.

Also performing on the night will be local favourite Naomi Pigram. Naomi is one of the most exciting new Indigenous female artists to spring from the dynamic musical culture of Broome. Naomi has also fronted notable Indigenous bands such as One Strum and St Agne.

Missy is no stranger to Sun Pictures which is the world’s oldest picture garden still in operation. In 2009, the cinema hosted the premiere of the Western Australian made musical film Bran Nue Dae, in which Missy made her acting debut as the character of Annie.

Don’t miss what promises to be a special evening of music!

Missy has just been announced to perform a special acoustic set at the Mbantua Festival in Alice Springs this October. The singer-songwriter was announced on the lineup at the festival’s launch last week, alongside The Tjintu Desert Band.

The festival will take place in the heart of Alice Springs at the historic Telegraph Station between 9-13 October 2013.

Featuring hundreds of Indigenous performers the festival boasts a range of live performances, theatre productions, film screenings and workshops will take place, all aimed at showcasing some of the country’s best local, indigenous culture and talent.

Early bird tickets for the five-day festival are on sale now. For tickets and further info visit www.mbantuafestival.com.au

Voting has started for triple j’s Hottest 100 songs of the last 20 years.

Missy has featured frequently in the Hottest 100 over the years peaking at #2 with ‘Scar’ in 2004.

If you’re casting a vote for Missy, we suggest putting in a vote for ‘Scar’ … or any of your other favourites as well of course. You can do it now @http://www.abc.net.au/triplej/hottest100/alltime/20years/.

Due to circumstances beyond Missy’s control, she is unable to travel to Broome for this weekend’s Mother’s Day Music Festival.  Refunds will be available for ticket holders at the entry gate tomorrow (Saturday) from 4pm.  You will need to quote your Moshtix order number to process a refund.  Missy sincerely apologises for any inconvenience caused by her unavoidable late cancellation and she hopes music fans will still head along to the festival for what promises to be a very special evening of music.

Missy has been announce to perform a special acoustic set at the Mother’s Day Music Festival in Broome on Sat May 11.

Tickets are on sale now via www.moshtix.com.au with part proceeds being donated to the Leukaemia Foundation, Kyle Andrews Foundation and the Royal Flying Doctor Service.

Gates at this all ages, drug and alcohol free event will open at 4pm with food and drinks available to purchase at the festival, no BYO.

The free open-air Concert for the Kimberley will be held at 1.30pm at the Fremantle Esplanade on February 24 and will feature a protest march through the town.

“This concert and rally is a call to arms for all West Australians to stand up and protect one of our finest national treasures, The Kimberley,” said John Butler. “To think of industrialising this truly special region in order to exploit a resource which is more profitable and practical to process somewhere else seems absolutely ludicrous.“

“I’m happy to help in any way. This is such an important issue, about a place very dear to my heart. Australians deserve to know that one our great wilderness’ is in serious danger of being destroyed forever”

Wilderness Society WA Coordinator Peter Robertson said the Society was delighted to be working with Missy and John to defend the Kimberley.

“The future of the Kimberley, especially the controversial proposed gas hub, is now a major issue across Australia and will feature strongly in both State and Federal elections,” said Mr Robertson.

The spectacular wilderness of the Kimberley’s James Prices Point is under threat by oil and gas giants Woodside, Shell, BHP Billiton, BP, Mitsubishi and Mitsui who plan to build Australia’s biggest industrial development, a needless destruction of something too precious to lose forever.

The Kimberley coast is classed in the top 4{8c7182c8a34ec4ec9212ad453ffbf7291e5ae01fcacfb4928d4d46071654c352} of the least untouched marine environments in the world alongside the Arctic and Antarctic oceans. Its pristine waters are home to the world’s largest humpback whale nursery, and threatened dolphins, sea turtles and dugongs. The region is also a significant Indigenous heritage site, is home to the longest chain of dinosaur footprints on the planet, and has known populations of endangered bilby.

Concert for the Kimberley
Where Fremantle Esplanade, Fremantle WA
When Sunday February 24th 1.30pm – 6.30pm
How much FREE (donations welcome for the Protect the Kimberley campaign) 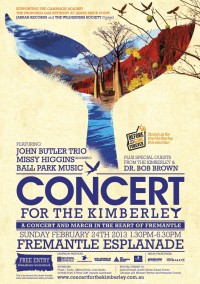