CENTRAL COAST: I’m playing at Lighthouse Festival with Didirri, Sam Windley, Elaskia, +more in November. Hope to see you there! Tickets on sale this Thursday June 17 at 9am.
Tickets: https://tickets.oztix.com.au/outlet/event/a6e5c326-06b0-42bb-85f5-0645617e31dc
Missy xx
QUEENSLAND! This Winter I’ll be doing a big gig at Cairns Festival on Sunday 29 August. I feel like it’s been forever since I’ve played in Cairns, the band and I are so excited to get up there. Cairns is always such a warm and beautiful change from cold Melbourne so I’m looking forward to feeling like I’m on holiday up there! Tickets on sale now via https://www.cairns.qld.gov.au/…/popular…/missy-higgins
Missy xx 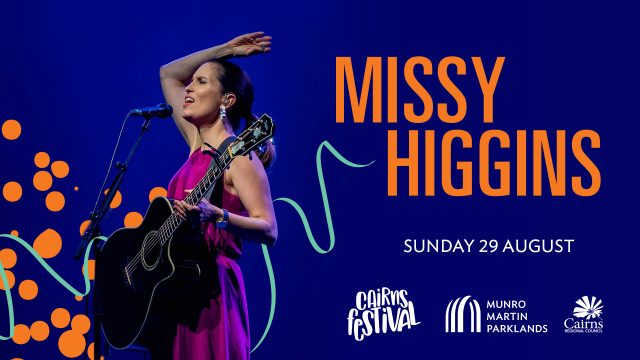 I’m on Anh’s Brush With Fame! This Tuesday 1st June on @ABCTV. 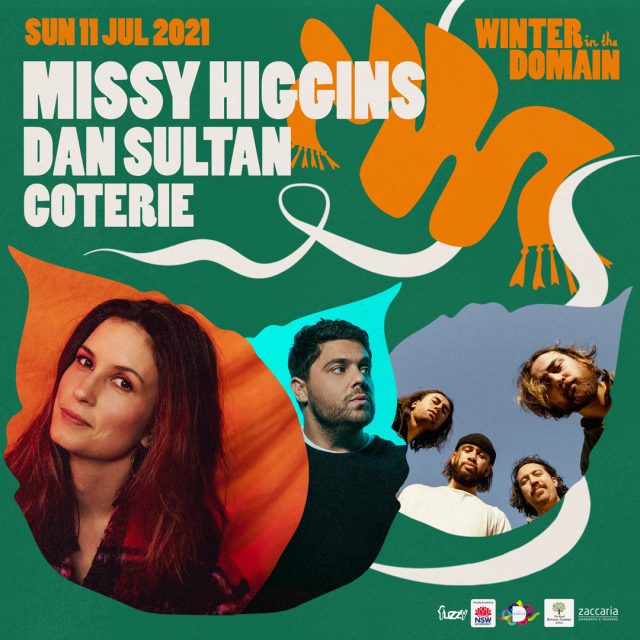 Very excited to announce this. This Sat 24 April 8pm on ABC my episode of The Set will be airing! The band and I had so much fun performing a few songs in the “backyard” (including a new song you won’t have heard) having a cheeky cocktail and a chat with the hosts and collaborating with rap artist Birdz on a well known song from the early 2000s that you won’t believe we dared take on! Birdz also does his own incredible set that blew me away. Any opportunities like this to play at the moment are like diamonds. So. Fun. Hope you enjoy 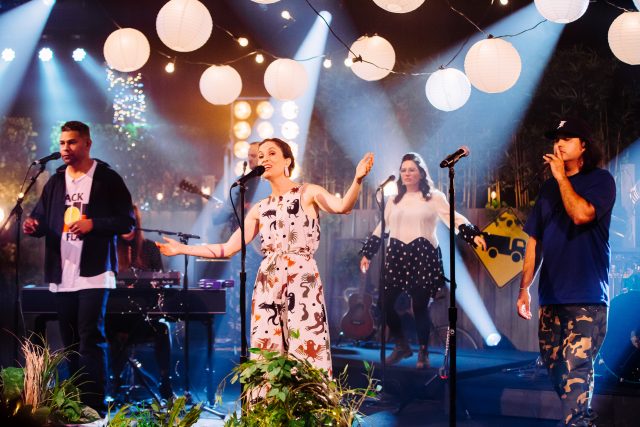 Missy’s song “Carry You”, written by Tim Minchin, is nominated for the prestigious peer-voted APRA Song of the Year! 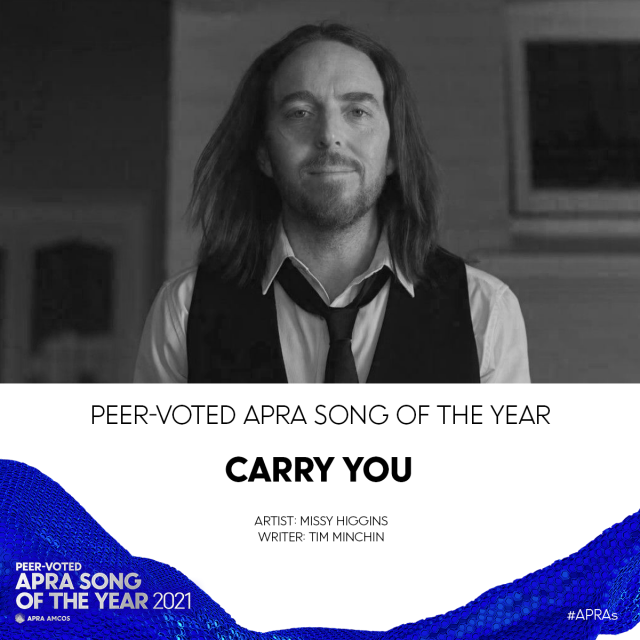 Hi everyone, some sad news about my WA shows in early March – unfortunately due to ongoing WA Border restrictions for Victorians, the promoters have had to make some changes.
FREMANTLE PRISON SHOWS March 4 + 5
Thu 4 March show has been rescheduled to Thu 15 April and the Fri 5 March show is now rescheduled to Fri 16 April. If you are able to attend on the new dates you don’t have to do anything – you can hold on to your existing ticket and it will still be valid for the new date. If you are not able to attend on the new date you are entitled to a refund by contacting Ticketmaster prior to Mon 22 March.
GOOD DAY SUNSHINE FESTIVAL March 6
Good Day Sunshine Festival has sadly been cancelled. All ticket holders will automatically receive refunds. To make up for this cancellation, we are immediately announcing that Ben Lee and I will be doing a replacement show at 3 Oceans Winery on Sat 17 April. Pre-sale for this show is only available to current Good Day Sunshine Festival ticket holders, and they will receive the pre-sale ticketing link via email. General public on-sale is from 10:00am local time Mon 1 March via www.missyhiggins.com/shows.
Heartbroken that this has had to happen – but as with everything in the past year, we just have to roll with the punches. We’ll all be together again very soon!
Missy x 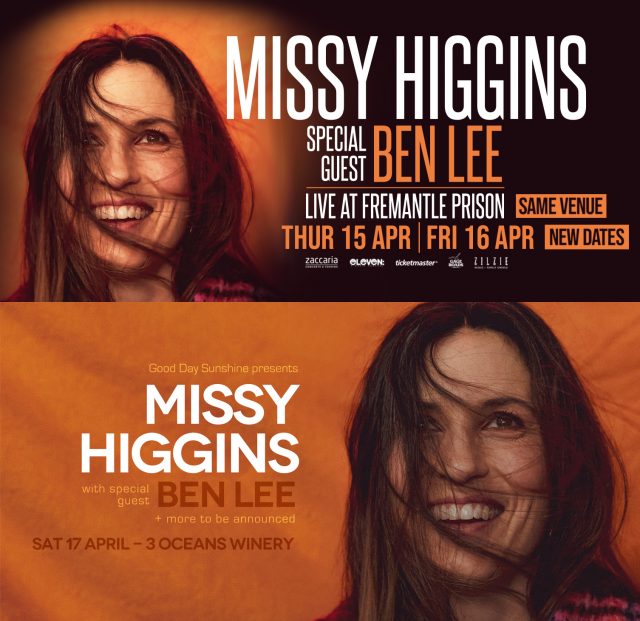 Hi everyone! I’m doing a live stream gig on my TikTok for Isol-Aid Festival this Sunday 7 February at 6:00pm 💕
Be sure to tune in on time because it’ll only last about half an hour – and I promise we’ll jam pack heaps of tunes in there for you all! If you want to get a notification when the stream starts, follow my TikTok @missyhigginsmusic now… which you really should be doing anyway! 😂 Have a great rest of the week and I’ll see you on Sunday!
Follow me on TikTok: https://vm.tiktok.com/ZSE7pmdP 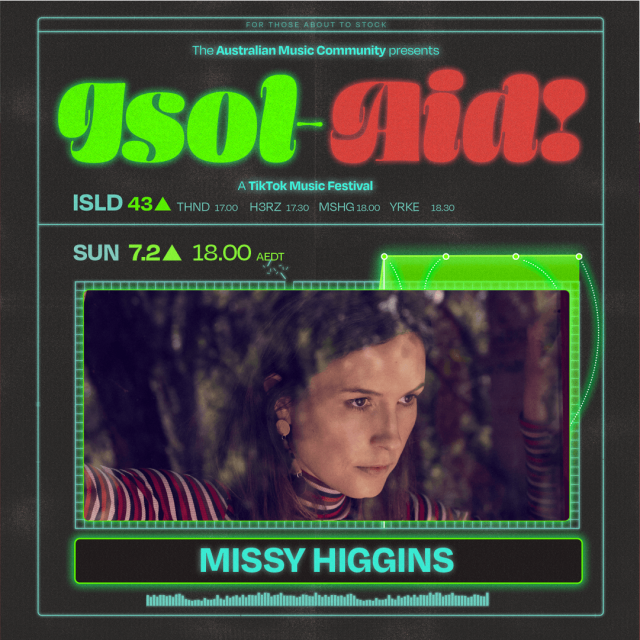 Victoria, see you on the surf coast this Saturday! All tickets under $50, and on sale from 12:00pm local time Tue 19 Jan (tomorrow) via soundsbettertogether.com

Victoria, see you on the surf coast this Saturday! All tickets under $50, and on sale from 12:00pm local time Tue 19 Jan (tomorrow) via https://t.co/DlmU9nLEPN 💕 pic.twitter.com/I0cOySeqFL

And just like that… yet another gig! Very happy to announce a special concert at Sidney Myer Music Bowl on Wed 27 Jan next year. This will be my first show of the new year, and at one of my favourite Melbourne venues too. Ahhh.. I have some great memories of this place.

Tickets on sale this Wed 16 Dec at 12:00pm local time via frntr.co/MissyHiggins21Mel.

Can’t wait to see you all there! (socially distanced of course). 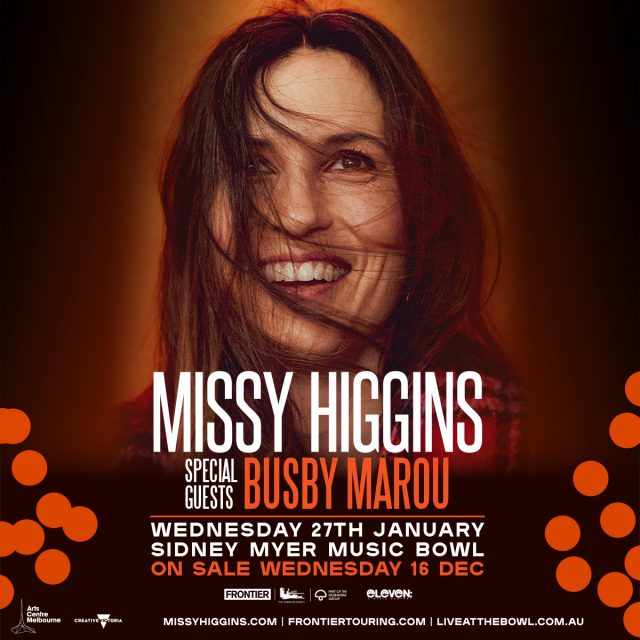 Thanks to everyone who entered my #WhenTheMachineStarts dance comp! Hopefully we can all dance to this song together in person very soon 🥰

The first two are at Fremantle Prison on Thu 4 and Fri 5 March – and I’ll be playing with my good friend Ben Lee! Looking forward to performing at such an amazing venue.

I’m also playing the Good Day Sunshine Festival at Dunsborough Fields in Perth the day after on Sat 6 March with The Waifs and Ben Lee (what a line up !!!). Pre-sale for this one starts tomorrow, just head to www.gooddaysunshinefest.com for all the info.

Genuinely so happy to play these gigs and can’t wait to see everyone. Until then! 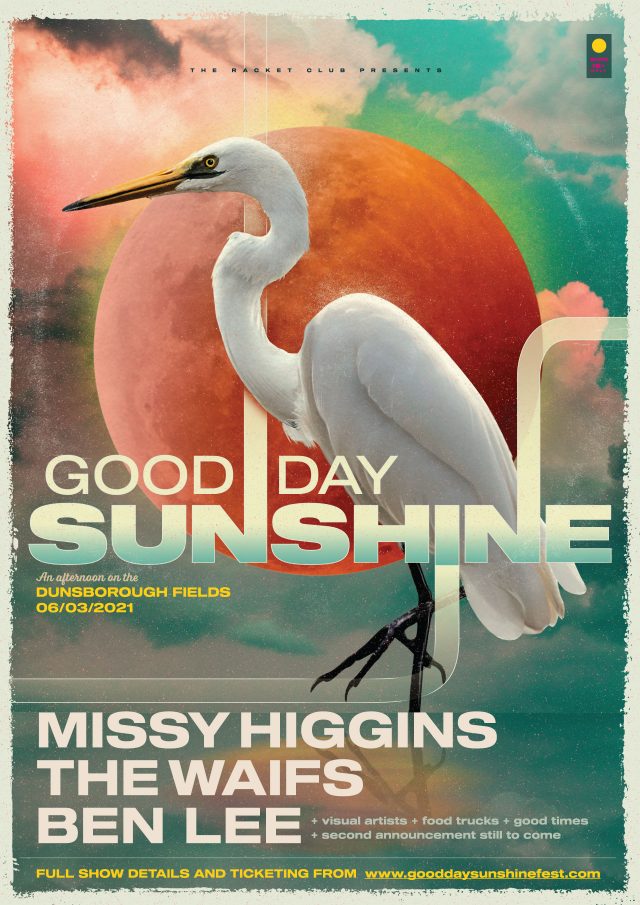 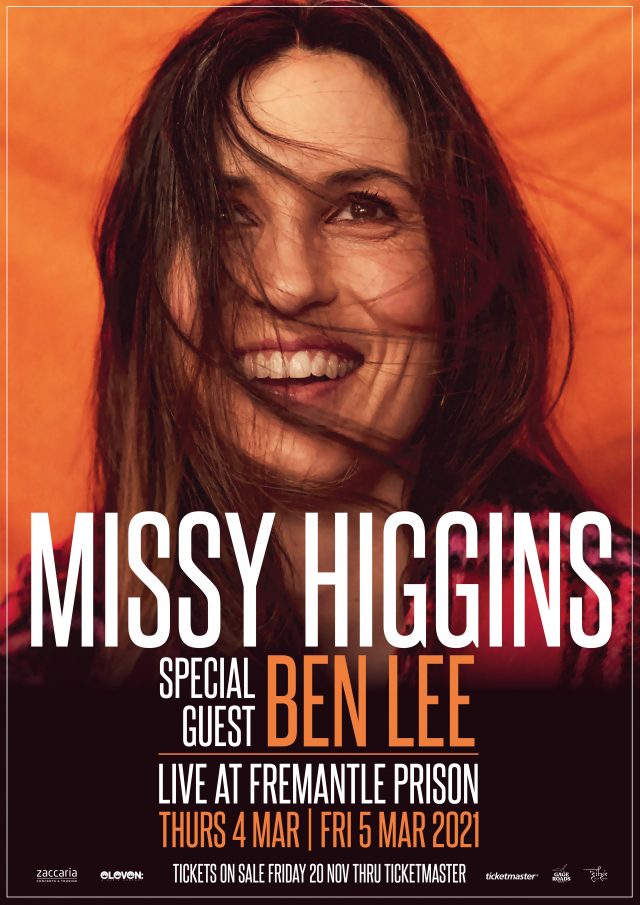 Hi Everyone. Wow, what a year it’s been.

Isn’t it strange when you suddenly become aware that you’re in the middle of a defining moment in history? Someday soon we’ll probably refer to everything as either “pre-covid” or “post-covid” (Pre-Co and Po-Co? just riffing here). Weird, right? Even now I feel like we’re still standing in the middle of a murky bubble, struggling to see what lies beyond. Hopefully it involves lots of touching and hugging and live music.

Many of my friends and family have really struggled during this pandemic; some lost their livelihoods overnight, others have had to spend weeks cooped up alone in very dark headspaces. My industry has been one of the hardest hit and it’s been heart-breaking and brutal for so many.

Yet at the same time, there have been inspiring things going on as well. I think it’s actually given me more faith in humanity than any other time in history. It’s also made me realise how disconnected we have been from each other. I’ve seen strangers reaching out to each other to see if they’re okay. Work colleagues checking in on each other’s mental health for the first time ever and really caring about the answer. Streets and communities creating platforms where they can connect and share stories and offer support. A conversation about the things that really matter. There’s a feeling of solidarity with the entire globe that has never been possible before. Obviously we would rather it be for a different reason and not everyone has covered themselves in glory but it still blows my mind!

Of course, I know I’ve been lucky during all this compared to so many. My kids have been (quite literally!) climbing the walls and driving me bonkers like every other family in lock-down and I’ve struggled with the same roller-coaster emotions as any human would, but work-wise I was lucky to finish all my summer touring just before this happened, and quite frankly, we have the means to get through it. We have a backyard and the kids have been able to dig in the dirt and climb trees. I’ve spent many moments feeling very grateful (many moments fantasising about being single and childless too, but we don’t have to go there!) and it was during one of those particularly happy moments that I sat down and wrote a new song called “When The Machine Starts” which I’m releasing today.

I know this track won’t hit home for a lot of people and that’s OK. I wrote it during Victorian Lock-down 1.0 at a time when I was feeling particularly lucky to be able to spend so much time with the kids while they’re still so young. To be able to look at my calendar and see NOTHING on it, forcing me to be completely in the moment because suddenly the future didn’t exist.

Surprisingly, that felt like a gift. I realised I’d been running an invisible race, a rabid dog chasing a phantom rabbit. But to what end? So to be given this chance to stop… well, I really didn’t want to forget it. So this song came out of that moment. It’s a post-it note to my future self: “don’t forget the good things you’ve learnt!”.

Anyway … sending heaps and heaps of love to you all. Wherever you are. Whatever you’re going through. Hang in there, because the end is in sight.

And I hope some of you get something out of this song, even if it’s just the chance to consider the silver linings in this whole shitty experience. Whatever the case, it’s got to be helpful to ask ourselves: “What do I want to take from all this, and what do I want to leave behind?” It’d be great if we could find something positive to take with us from such a dark moment … when the machine starts.

Wow very honoured to have been nominated for a Screen Music Award for our song ‘Edge Of Something’! I wrote it (along with the incredible composers Antony Partos and Matteo Zongales) for the ground-breaking ABC drama ‘Total Control’. I was so proud to be involved with this project and blown away by the quality of the show in every way. If you haven’t seen it please do, Deborah Mailman and Rachel Griffiths will blow your mind!
And as an extra bonus ‘Carry You’, the song written by Tim Minchin that I recorded for his equally outstanding series ‘Upright’, has been nominated as well!

Bravo to @missyhiggins, Antony Partos and @filmmusicguy who are nominated at the #ScreenMusicAwards for Edge of Something from Total Control pic.twitter.com/ov8AABc7eX

Hi everyone! I’m very excited to be announcing gigs again – and this time it’s Albury’s turn! I’ll be doing a show at the Albury Entertainment Centre on Sat 21 Nov as part of Great Southern Nights. Tickets on sale now: https://alburyentertainmentcentre.com.au/whatson/missy-higgins…
UPDATE: The first Albury show on Sat 21 Nov has sold out – so we’ve added a matinee show on the same day! Tickets on sale Tue 20 Oct at 9:00am local time via www.alburyentertainmentcentre.com.au/whatson/missy-higgins
Missy x

Hi everyone! I’m very excited to be announcing gigs again – and this time it’s Albury’s turn ☺️ I’ll be doing a show at the Albury Entertainment Centre on Sat 21 Nov as part of Great Southern Nights. Tickets on sale now: https://t.co/IERtXY0nJQ

Finally a show announcement! I’m so excited to finally start getting shows back in the calendar, I’ve missed you all and I’ve missed playing live!! Glenelg Beach is an awesome venue and this time the line up is incredible, check out the bill of this show 😱 Can’t wait to see you all from the stage soon! Head to SummerSalt 2021 | Glenelg Beach for more info X 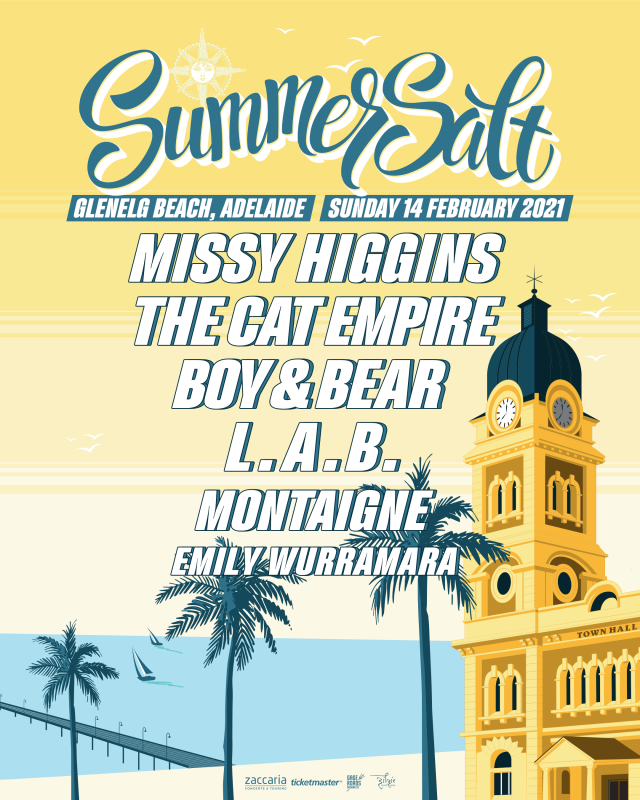 Very chuffed to be amongst great company talking about the legendary Slim Dusty in this new incredible movie about his life and career. In cinemas now! x #SlimandIMovie

For any struggling parents out there (particularly

This error message is only visible to WordPress admins


Error: API requests are being delayed for this account. New posts will not be retrieved.