The songs from this new mini-album pick up themes of exploitation and female empowerment that run through “Total Control” and which also dominated real world headlines last year as a string of abuse allegations emerging from Parliament House.

Appearing on the TV show “Q&A” late last year, Missy noted that the strong calls for change by leading voices like Brittany Higgins and Australian Of The Year Grace Tame had been a further inspiration for new songs like “Watch Out” and “I Take It Back”.

The latest single to be lifted from “Total Control” is “The Collector” which is described as Missy as “a raw rollicking, stomping sing-along with unashamed venom. It’s the Kill-Bill-esque revenge fantasy of a woman who NEVER forgets” 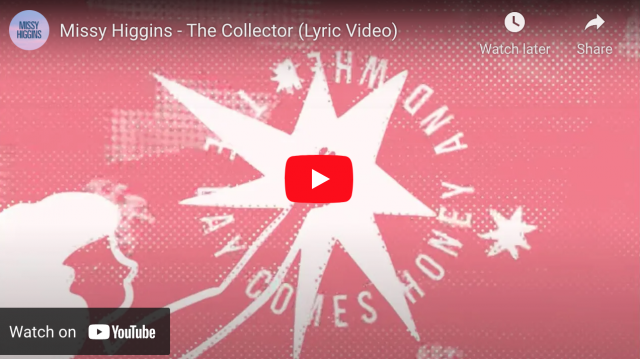 The “Total Control” mini-album was inspired initially by musical fragments Missy pieced together to fit certain scenes in the ABC’s Total Control soundtrack. What started as brief instrumentals gradually grew lyrics and some expanded into full songs across 2020 and 2021. Missy’s unusually deep association with the show included lead single “Edge Of Something” which featured as the main promo for Season Two.

The program has attracted worldwide acclaim with The Wall Street Journal applauding “…its biting vision of the prevailing codes, and what passes for right and wrong in political society.” Stuff NZ said: “Total Control offers a scathing examination of Australian politics [and] a clarion call for social justice” and said the music was “a magnificent showcase for the songwriting and singing skills of Missy Higgins”.

Over coming months Missy Higgins will headline two separate touring festivals at once – the beachy “Summers​alt” and a new all female event called “Wildflower”. The beloved singer/songwriter will also play gigs in cities from Darwin to Torquay, from Birdsville to Broken Hill.

Aptly enough Missy ushered in 2022 with a pre-fireworks performance of the title track on ABCTV’s New Year’s Eve extravaganza – literally starting this busy year with a bang.

“Like lots of people I guess I’m trying to make up for lost time”, Missy explains. “The last two years made me realise how much I missed playing music for people so I want to get out there and do it while we all can. I’m not taking anything for granted anymore.”

I don’t know about you but I got unexpectedly te