A note from Missy…

Like most people, the photo of little Alan Kurdi being carried out of the water shook me to my core. We often read about the tragic plight of refugees but I think that picture exposed us to the reality in such a raw way that the truth became inescapable.  From where I sat in my comfortable living room nursing my newborn son, the tiny child in that wrenching image could have been my own little boy. I felt overwhelmed by a profound protective instinct for him and people like him.

Alan died along with his little brother, his mother and many other Syrian people on that boat. The only survivor of the Kurdi family was Alan’s father, Abdullah.  My heart wept for Abdullah – his loss was literally unimaginable.

Writing songs has always been my way of dealing with strong feelings and this situation obviously stirred up a lot of emotions. So initially I started writing about it just to try and make some sense out of something so senseless.

At the same time I realised that it was a complicated situation and so I read as many articles as I could about the Kurdi family. It soon became clear that various people were trying to co-opt Alan’s story for their own purposes and that lead to all sorts of claims and counterclaims about their circumstances. As far as I could tell it seems that Abdullah’s sister lived in Canada and he ultimately dreamed of having his family join her there. Their brother had previously attempted to obtain a visa into Canada but had been refused, so believing that there was no other choice, Abdullah apparently borrowed the money from his Canadian sister to pay an illegal people smuggler to take him and his family somewhere safe. Their dream? To escape a life of violence in Syria and find peace in Canada.

I wanted to try to write this story from Abdullah’s perspective because ultimately I felt his quest was so relatable. I imagined that during that tumultuous boat journey, his heart cried out for Canada to embrace him and his family. Obviously, in this song, ‘Canada’ represents anywhere in the world that might be the preferred sanctuary for people like the Kurdi’s. Amongst other countries, it represents Australia which has such an abhorrent record in dealing with people seeking asylum who try to travel to our shores by boat. Some sections of the media have helped turned these poor people into criminals, but in reality they are usually exactly like us; just not lucky enough to be born into our privilege.

‘Oh Canada’ simply aims to tell a story. It’s not preaching anything in particular, it’s simply my attempt to make sense out of senselessness. If it also reminds people of what happened to Alan and his family then I think that would be good – after what they went through they don’t deserve to be forgotten. If the song reminds people how the picture of that lifeless little boy made them feel then that would be even better because that proves we’re all very similar people who just happen to live under different circumstances. If the song inspires anyone to do something on behalf of refugees – to speak up for their rights and to push back against those who seek to inflame our fears and prejudices – then I think that would be best of all.

‘Oh Canada’ is accompanied by a powerful animated video created by award winning director Natasha Pincus and animation director Nicholas Kallincos and you can view it below. 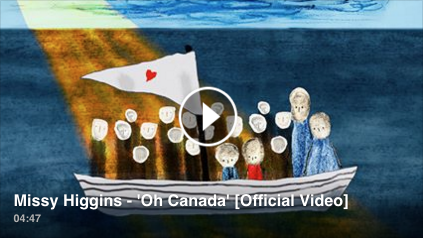 Caritas and World Vision support programs in Syria and neighbouring countries that create spaces where children can express their feelings of the past and hopes for the future. The drawings in the “Oh Canada” video are by children in Caritas programs in Damascus, Syria and in World Vision programs in Beirut, Lebanon. Both the global Caritas network and World Vision have helped millions of people affected by the crisis in the Middle East.